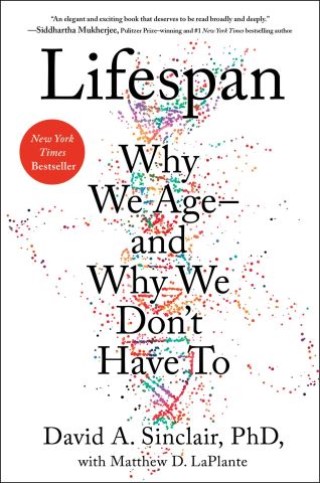 Why We Age—and Why We Don't Have To

A paradigm-shifting book from an acclaimed Harvard Medical School scientist and one of Time’s most influential people.

It’s a seemingly undeniable truth that aging is inevitable. But what if everything we’ve been taught to believe about aging is wrong? What if we could choose our lifespan?

In this groundbreaking book, Dr. David Sinclair, leading world authority on genetics and longevity, reveals a bold new theory for why we age. As he writes: “Aging is a disease, and that disease is treatable.”

This eye-opening and provocative work takes us to the frontlines of research that is pushing the boundaries on our perceived scientific limitations, revealing incredible breakthroughs—many from Dr. David Sinclair’s own lab at Harvard—that demonstrate how we can slow down, or even reverse, aging. The key is activating newly discovered vitality genes, the descendants of an ancient genetic survival circuit that is both the cause of aging and the key to reversing it. Recent experiments in genetic reprogramming suggest that in the near future we may not just be able to feel younger, but actually become younger.

Through a page-turning narrative, Dr. Sinclair invites you into the process of scientific discovery and reveals the emerging technologies and simple lifestyle changes—such as intermittent fasting, cold exposure, exercising with the right intensity, and eating less meat—that have been shown to help us live younger and healthier for longer. At once a roadmap for taking charge of our own health destiny and a bold new vision for the future of humankind, Lifespan will forever change the way we think about why we age and what we can do about it.

David A. Sinclair: David Sinclair, PhD, AO, is a professor of genetics at Harvard Medical School. One of the leading innovators of his generation, he has been named by Time as “one of the 100 most influential people in the world” and top fifty most influential people in healthcare. He is a board member of the American Federation for Aging Research and has received more than thirty-five awards for his research and major scientific breakthroughs. Dr. Sinclair and his work have been featured on 60 Minutes, Today, The Wall Street Journal, The New York Times, Fortune, and Newsweek, among others. He lives in Boston and enjoys hiking and kayaking with his wife and three children. To learn more, visit LifespanBook.com and follow him on Twitter @DavidASinclair.Matthew LaPlante is an associate professor of journalistic writing at Utah State University, where he teaches news reporting and feature writing. A former US Navy intelligence specialist and Middle East war correspondent, he is the author of Superlative: The Biology of Extremes and the cowriter of multiple other books on the intersection of science and society. He lives in Salt Lake City and skis in Big Cottonwood Canyon. To learn more, visit MDLaPlante.com and follow him on Twitter @MDLaPlante.